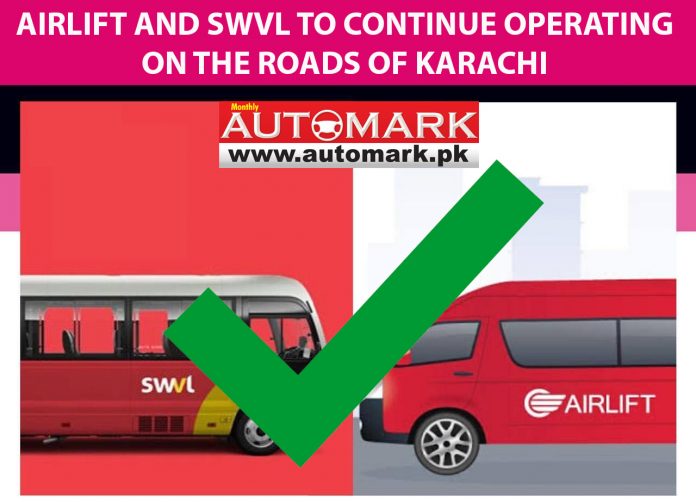 Sindh and Mass transit secretary, Ghulam Abbas Detho has written a letter to Regional Transport Authority,secretary Nadir Shah, to put a hold on Airlift and Swvl services. He says that both companies have started their operations without first obtaining Non-objection certificate (NOC), fitness certificates of their vans and route permit.

“They have started operations in Karachi without getting registered with the regulatory authority,” Detho said, adding it is a violation of Section 2(5)(20) and Section 39 and 40 of the Motor Vehicle Ordinance, 1965.

The RTA secretary, Nazar Hussain Shahani has said that the authority has given these apps based services ‘Airlift and Swvl’ a week to fulfill the registration process or else DIG will be informed to take action against the service providers.

He also that at present, Pakistan does not have legislation that deals with online transport services, however, the lawyers are working on this and it will soon be completed.

On the other hand, Executive Director Airlift, Syed Maher Hyder has said that they are ready to cooperate with Sindh authorities and fulfill all legal requirements, however; they have yet to receive any letter from the authorities. He also said that we have been assured by the government that the company is a part of the system and taxable. So the news of operations being stopped is just a mismatch of conversation. Further adding he said that the government should accept technological advancements as this will open roads to employment and ease of transport for the civilians.

In regards of the law being drafted, minister transport Owais Shah said to Airlift, that the bill will be tailored to impose lesser taxes on online taxi and vans services in Sindh as compared to other provinces and the van services will be given a route permit. The bill will be discussed in the next Sindh Cabinet meeting.

Airlift and Swvl are app-based van services which started operations last month. They have been quite popular amongst the citizens due to their A/C vans, the ease of booking rides and having cheaper rates than the online taxi services. Quickly gaining stardom ‘Airlift’ recently gained 12 million worth of investments and it seems to fulfill the lack of local transport system in a densely populated city like Karachi.