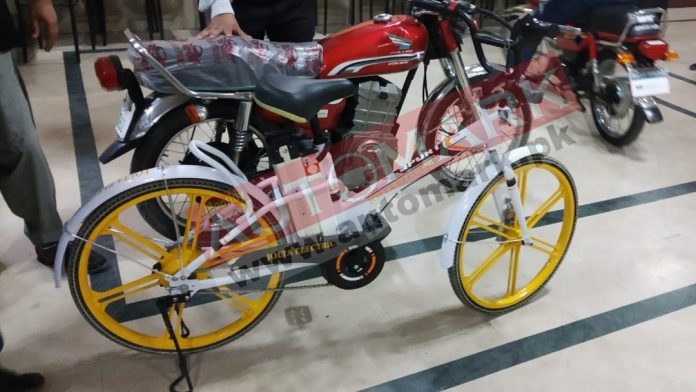 It is about time that Pakistan also steps into producing and promoting electric cars and motorbikes in order to protect the environment. Auj technologies a Lahore base company, are the first to introduce Jolta e-Bikes which will be made in Pakistan.

With 900 PKR per month expense Jolta e-Bikes will be soon available on showrooms for customers. Cars and rickshaws will also be electrified.

The founder of Jolta e-bikes, Mr. Raheel lqbal told the media at press club that Jolta E-70 and Jolta E-125 e-Bikes will soon be available in the market for sale.  These e-Bikes will work on electricity and have monthly expense of only 900 PKR and its range will be 70 KM.

Another great aspect about the e-bike is that it doesn’t possess parts like lever, mobile oil, chain and gear. It makes it very easy to charge the bikes as well, at home or the office.

While discussing about National Electric Vehicle Policy, Mr. Raheel said they are very pleased with the Prime Minister and Federal Ministry for approving first National Electric vehicle policy. They are thankful to add recommendations of AUJ technologies in the policy draft.

Furthermore, electric vehicles will contribute not only in pollution reduction but it also save the country’s Import Bill significantly. In Pakistan, 40% pollution is because of transport which causes problems like smog. By reducing the usage of these vehicles, another factor that also comes into play is oil import. Using electric cars and bikes will also reduce the import of oil. In addition to this, local industries will be installed which offer millions of jobs opportunities for local people.

Director marketing of a company (which produces e-Bikes that work with electrical energy) says AUJ technologies is first company in Pakistan that produce e-Bikes that work with electrical energy and design them locally.  All parts of e-Bikes like battery system, chargers, controller etc are produced locally, and therefore they will be available easily which will give a boost to our automotive industry. Pretty soon, rickshaws or cars will be electrified.