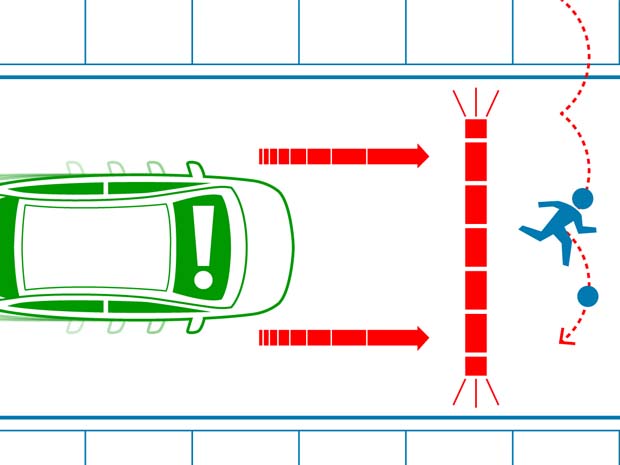 Humans are still a factor in the adaptation of automatic braking

The remarkable thing about letting a car do the braking for you is not that the car stops. It’s how late the car hits the brakes. It’s almost as if a teenager were testing his or her reflexes. Those of us raised on automatic transmissions and cruise control may expect cars to take flighty human drivers out of the loop rather quickly. But if my ride in a test vehicle at the 2013 Frankfurt Motor Show is any indicator, carmakers are taking their time taking over. Even the most imperturbable driving instructor might get jumpy using today’s autonomous emergency braking (AEB), also called advanced emergency braking systems.

AEB isn’t even a teenager: Mercedes-Benz introduced an early version with its 2005 S-Class. That system used radar to detect obstacles, warned drivers, and primed brakes so that they would be more effective when the driver finally used them. Yet in an indoor test in simulated foggy conditions, the car’s radar failed to activate the system. A journalist crashed one into another Mercedes-Benz during a televised demonstration. Company engineers later decided that the garage’s steel interior had confused the radar. But the technology is maturing, and the European New Car Assessment Programme (Euro NCAP), a public-private car-testing body and the counterpart to the U.S. NCAP, will require AEB to obtain its highest safety rating next year

Now the state of the art is to use more than one type of sensor to cross-check for obstacles, carmakers say. Some complement radar systems with optical cameras. Today’s S-Class has short-range and long-range radar, optical cameras, and ultrasonic detectors for the closest obstacles. Optical cameras can be fooled by sunlight, wet roads, and night, of course, and ultrasonic sensors work only at the shortest ranges and lowest speeds. Certain research vehicles also include lidar, a radarlike system that uses light rather than radio waves. As the instruments grow smaller and cheaper, carmakers may include lidar in production cars as well.

Yet carmakers still hesitate to override a driver’s instincts. The German auto club ADAC reported in a test [pdf] that it deducted points from a BMW 5 Series for initiating only partial braking after warning the driver. But such a limited action may please self-confident drivers. Harald Barth, a product marketing manager at car supplier Valeo, says that one reason carmakers have kept the brakes on autonomous driving is that they want to win the trust of drivers. “We need not just to offer good systems but also to educate the end user. We are going step by step,” he says.

That will also give engineers more time to figure out how humans react to having control taken away from them. Last year, a pair of studies applied analyses called system-of-systems and operator sequence diagrams to AEB scenarios. They both found that when autonomous systems attempt to take over from human drivers, humans do not always respond well. Or sometimes drivers respond too well and do not react in time to take over again when the autonomous systems attempt to return control to them. The latter study sounded a grim note: “There are no formal methods for testing the performance of AEBs from either a technical or human factors point of view. The effectiveness of AEBs will, however, become increasingly clear in the coming years through fatality and injury statistics,” its authors wrote.

Going slow will also give Euro NCAP and other testing bodies more time to improve their testing capacity. Now Euro NCAP uses a small trailer as the crash target, allowing only simulated rear-end collisions, but it says it will develop targets simulating pedestrians, among other improvements [pdf]. For pedestrians, if not anxious driving instructors, that should be a relief.