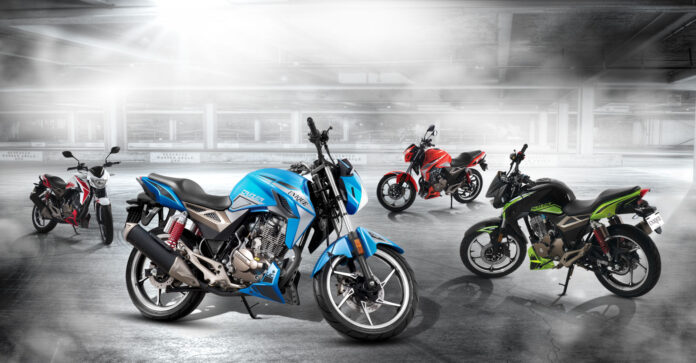 Like a looming boom in the auto sectors, Pakistan’s two wheeler assemblers are also enjoying their best ever days owing to massive revival in demand especially after the lull period of March to May 2020 in which April was observed as a complete lock down all over the country.

Buyers, who had failed to buy two wheelers during March to May 2020, have flooded the markets which the industry has never expected.

The huge demand of bikes appears surprising amid rising cost of living of consumers triggered by high food prices, rising utility charges and loss of jobs of many people in small industries and business centres due to depressed sales of various items.

Besides soaring cost of living, many cash rich consumers did not bother over rising prices of two wheelers which the Chinese and Japanese bike assemblers are still jacking up the prices due to high demand.

Price increase in bikes is being made despite low cost of imports of parts and accessories on account of gaining rupee against the dollar.

The prices of bikes should have either remained unchanged or absorbed by the assemblers if they are not reduced after rupee recovery as one dollar is now equivalent to Rs 152-153 in the interbank market as compared to Rs 168.41 in August 2020.

Like an eye wash on other food items’ prices and lack of any price checking mechanism by the government, the assemblers have been enjoying their best ever time by fully utilizing high demand of bikes from the buyers.

Rising demand has also led to high premium on bikes on two wheelers which are parked at the showrooms on which the authorized dealers of the showrooms first deny about bike availability but later agree to sell the bike on premium.

The government, who had already failed in controlling huge premiums or on money on locally assembled cars, has also proved helpless in the two wheeler segment by remaining a silent spectator, leaving the consumers at the mercy of dealers to pay hefty premiums amid higher production of bikes.

Even the buyers are still being asked to book hot selling bikes and in this category, Honda CG-125, which is a more than three decades old model, enjoys an edge over its competitors. Those in a hurry to own a bike pay an extra price as they cannot afford to wait for 15-20 days to get the bike delivered.

Honda CG-125 has been in high demand for many years but its assembler is not ready to handle the premium issue either deliberately or genuinely. Honda dealers simply say that the assembler has been failing to meet its burgeoning demand.

It has been noticed in the markets that demand for products usually drops when prices have continuously been enhanced but in bikes and other segments of the auto sector, the situation is quite the reverse. Even in the essential items like chicken, sugar, wheat flour, meat varieties, rice, pulses etc, consumers had shown extra enthusiasm in buying these items despite persistent increase in their prices.

Bikes have remained a most sought after item also due to the pathetic public and private transport system. Besides, traffic jams have also forced the consumers to purchase two wheelers in order to reach the respective destinations without any hassle. Two wheelers is the only option for the consumers and this is a plus point for the assemblers to keep raising prices on demand and supply gap.

Another reason to switch over to bikes has been high prices of locally assembled and imported cars which force many people to buy two wheelers and even compromise on used bikes.

Besides, many people, who own a good car, also keep at least one bike in hand to meet daily requirements of markets and other daily routine works instead of going on the four wheelers.

High petrol prices can also be blamed in keeping two wheelers demand up as many consumers cannot afford costly petrol on their four wheelers.

Auto market has also seen a new trend in the last few years relating to rising sales of highly expensive 125-150cc bikes, but instead of showing any reluctance towards costly bikes, consumers have shown more passion towards heavy bikes due to better suspension and comfort than 70cc.

Besides, the 2020 heavy rains and thunderstorm had also proved devastative for the 70cc bike owners who faced a lot of problems in reaching their homes as water entered the bikes’ silencers and carburetors due to very little gap between the silencer and engine with the road.

In heavy bikes, silencers and carburetors are fixed much higher which allow a tension free ride to the bike owners in case of heavy rains and flood like situation.

High demand and rising sales of bikes can be gauged from the soaring import volume of completely and semi knocked down (CKD/SKD) kits in the last 10 months of the current fiscal.

According to figures of Pakistan Bureau of Statistics (PBS), import of completely and semi knocked down kits (CKD/SKD) in 10FY21 has increased by 13 per cent to $60.5 million from $53.3 million in the same period of last fiscal.

Increasing trend in imports of parts and accessories looks a bit contradictory to the assemblers’ claims of achieving over 95 percent localization in two wheelers. However, a problem exists with the parts makers who rely on many imported parts. The assemblers and vendors claim that raw material prices had almost doubled and tripled followed by a meteoric hike in steel and plastic items’ prices and in freight charges which have nullified the positive impact of low landed cost on account of rupee appreciation against the dollar.
They said local steel mills have been continuously pushing up steel related items’ prices for the last 10 months, thus putting extra pressure on cost of production.

Not only locally made bikes are in high demand, the PBS figures also suggest a whopping rise in import of completely built up (CBU) bikes in the last 10 months.
Import of CBU bikes in 10FY21 has swelled by 233 per cent to $2.7 million from $816,000 in the same period last fiscal.
Industry people attributed this sharp hike in imports of bikes to rising arrival of scooties and heavy used bikes.

The increasing trend in sales of imported and locally made bikes suggests that people have enough cash in hand, especially those people who belong to the agriculture sector.
Barring poor cotton crops, other cash crops like wheat, sugarcane, rice etc has shown growth in production thus encouraging growers and farmers to lift new bikes. Bike sales depend a lot on rural buying.

Investors in food items are also enjoying their heydays as prices of sugar, wheat flour, pulses, rice, fruits, chicken, meat etc have achieved new peaks in the last 2.5 years.
Among the main beneficiaries of rural buying has been Atlas Honda Limited (AHL). Its overall sales of two-wheelers grew 39 per cent to 1.076 million units in 10MFY21 while Suzuki and Yamaha sold 19,973 and 18,375 units. United Auto Motorcycle sales grew by 30 per cent to 314,393 units.

The financial results of AHL for the year ending March 31, 2021 recorded sales of Rs 93 billion as compared to Rs 84.7 billion in the same period last year.
The Japanese assembler made a profit of Rs 3.6 billion versus Rs three billion in the above period.

AHL has been frequently pushing up prices on exchange rate parity. From January 2021 till to date, the company has increased prices by at least four times.
Chinese bike assemblers have also been active in raising prices.
Many consumers believe that the government has been paying lip service only in checking prices of food items despite holding weekly meetings of the National Price Monitoring Committee. They feel that when the government has been unable to achieve any results in curbing food items’ prices, then what they can expect in the auto sector which is run by the powerful cartels.

However, bike sales are likely to remain bullish till the public and private transport remains ineffective.