Indus Motor Company Limited (IMC) incorporated in 1989 as a joint venture company between the between the House of Habib (HOH), a local conglomerate and Toyota Motor Corporation (TMC) and Toyota Tsusho Corporation (TTC) of Japan. The company manufactures and markets Toyota brand vehicles  in Pakistan. The main product offerings include several variants of the flagship “Corolla” in the passenger cars category, “Hilux” in the light commercial vehicles segment and “Fortuner” in Sport Utility Vehicle (SUV) segment. The Company also sells limited units of Daihatsu brand vehicles.

The manufacturing facility and offices are located at a 105 acre site in Port Qasim, Karachi, while the product is delivered to end customers nationwide through a strong network of 39  independent 3S dealerships spread across the country. In its 25 years history since inception, IMC has sold more than 500,000 CBU/CKD vehicles and has demonstrated an impressive growth, in terms of volumetric increase from a modes beginning of 20 vehicles per day production in 1993 to 220 units daily at present through the development of human talent embracing the “Toyota Way” of quality and lean manufacturing. Over the years, IMC has made large 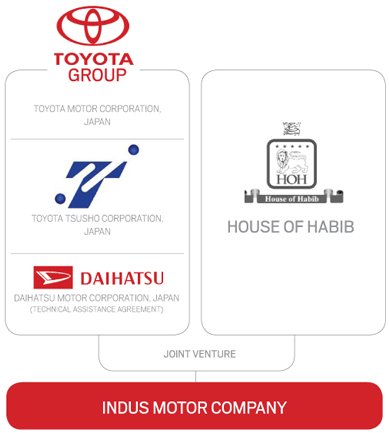 scale investments in enhancing its own capacity and in meeting customer requirements for new products. Today, Corolla is the largest selling automotive brand model in Pakistan and it also has the distinction of being #1 in Toyota’s Asian market.

The company invests heavily in 2,000 plus workforce of team members and management employees and creating a culture of high performing empowered teams working seamlessly across processes in search of quality and continuous improvement (kaizen). The core values of the company encourage employees to pursue high standards of business ethics and safety; communicate candidly by giving bad news first and respect for people. The bi-annual TMC morale surveys show employees giving a high positive score to the IMC work environment and level of job satisfaction.

The company has played a major role in the development of the entire value chain of the local auto industry and is proud to have contributed in poverty alleviation at the grass root level by nurturing localization that in turn has directly created thousands of job opportunities and transferred technology to 60 vendors supplying parts. IMC is also a major tax payer and significant contributor towards GOP exchequer.