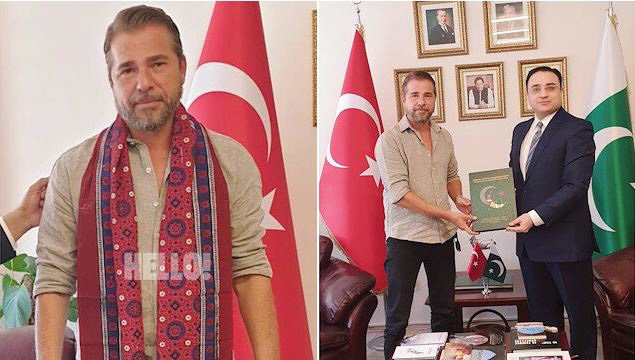 The Pakistani Consul General in Istanbul, Bilal Khan Pasha, shared the photos of the Turkish actor’s visit in which he is seen gifting a book to the actor.

One of the photographs shared on social media shows the heartthrob actor draping a traditional Pakistani block printed shawl, which is known as Ajrak.
The consulate also wished success to the actor in his future projects.

Often described as the Turkish Game of Thrones, the hit TV series ‘Resurrection: Ertuğrul depicts the 13th century Anatolia and tells the story before the establishment of the Ottoman Empire. It illustrates the struggle of Ertugrul Gazi, father of the empire’s first leader.

Ertugrul Gazi, the father of Osman I who laid the foundations of the Ottoman Empire, surged to fame in Pakistan when Prime Minister Imran Khan endorsed the series and said watching it would promote “Islamic history and ethics” among the country’s youth.