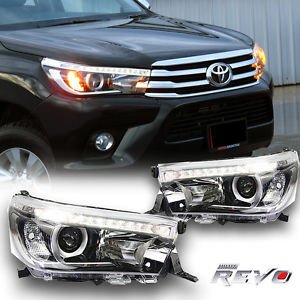 Indus motor company (IMC) which is the assembler and supplier of Toyota makes and models in Pakistan has as to our knowledge temporarily suspended the production of their Hilux Revo which holds a 3.0 litre 1KD-FTV engine with an intercooler and turbo.

It was the flagship model of Hilux, their main most upper class 4X4 below the Fortuner from the models they assemble locally in Pakistan. Along with that the Fortuner which is a luxury 4×4 SUV has been suspended as well but Indus Motor Company has confirmed it is going to soon be re-launched with a 2.8 litre diesel engine. According to some sources IMC is going to try flash the ECU and reprogram it for the 3.0 litre engine trying to fix the issues specified with mechanics, if they are not able to than the engine will get discontinued and replaced with the 2.8 litre diesel engine which is going to also be introduced in the 2018 Fortuner model.

According to some sources Revo was facing injector and rattling issues with the engine, and similar problems were also faced by people using refurbished imported models of Hilux.

When Hilux Revo was first launched 2 years ago with a refreshed look to the Hilux brand, the vehicle came with a 2.8 litre engine as opposed to what Indus Motor Company decided to launch in Pakistan (3.0 litre engine). They did not give a valid reason as to why they did it but market sources say, that they were trying to save money on it.

Now the company is deciding to launch it with the 2.8 litre 1GD-FTV Diesel engine but this will lead to being questioned by the people and feeling left out and since the engine didn’t last for a long period of time the consumers might face a shortage with parts. Many people complained they were facing bad fuel average and engine issues while the older imported Hilux was dealt with the problem of knocking issue with the engine since the engine was not compatible with diesel.