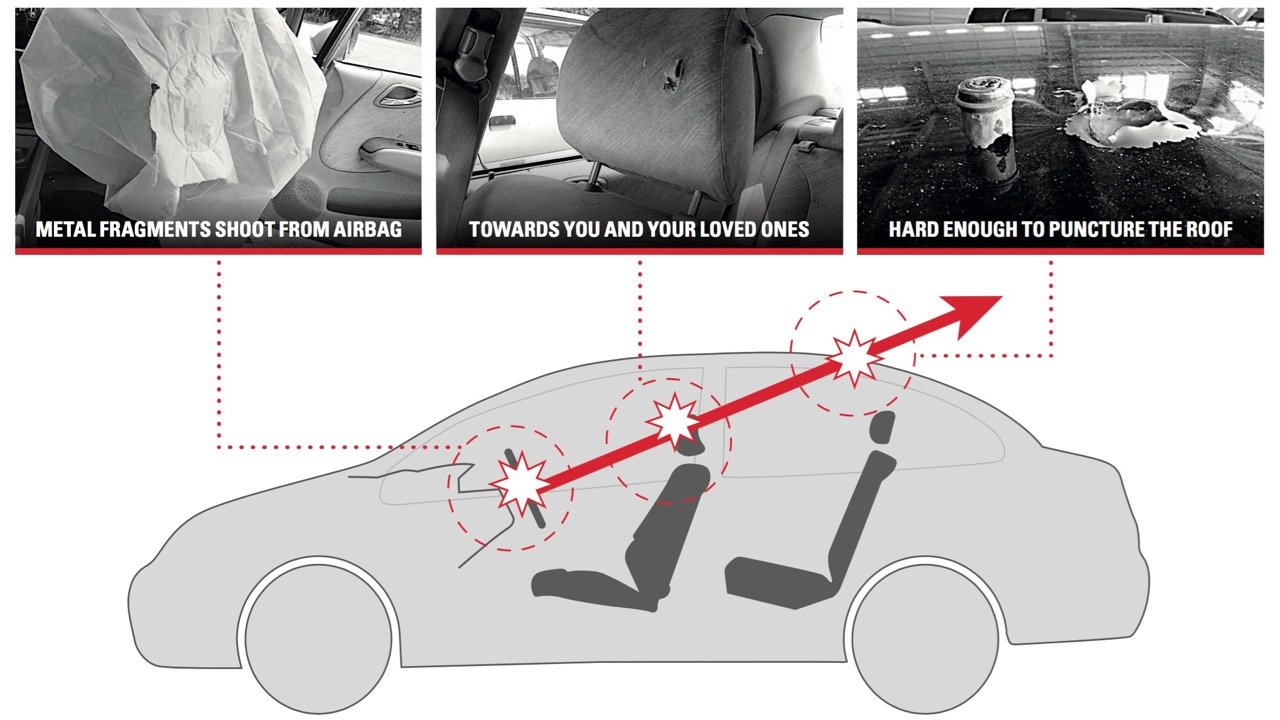 Honda Atlas Cars Limited (HACL) has initiated a half-hearted campaign informing owners of Honda Civic users/owners about installation of faulty Takata Air Bag and its impact on human lives. As per past practice nobody in the company was allowed to further give details to the press.

In March and April 2017, the company, instead of directly highlighting repercussion of Takata air bag, kicked off the serious issue in a non serious manner under the big headline “Free Upgrade of Vehicles” in the print media advertisement informing the customers that “in Honda Civic (2006 to 2012 model), imported CRV 2008 to 2011 model and imported Honda Accord 2004 to 2012 model – SRS inflator pump may have a possibility of malfunction. Vehicle owners were asked to contact authorized dealers immediately.”

The consumers saw the banner headline “Free Upgrade of Vehicles” and ignored the contents below the main headline. Due to lukewarm response from the vehicle owners, the company in middle of October 2017 again stepped up its earlier campaign with new name “Honda Special Service Campaign. Your Safety Is Our Top Priority” with more details to showcase the worse-case scenario in a vehicle that has yet to have its Takata airbag inflator replaced. The second campaign had also not focused on the main issue “faulty air bag” prominently.

The company, instead of giving priority to the risk factor of faulty air bag on the left passenger and driver, took the airbag issue very lightly in its media campaign fearing adverse impact on the sale of Honda Civic. The company had deliberately attempted to give secondary importance to air bag issue which on the contrary had hit headlines in world media over huge vehicles’ recalls plunging Takata air bag maker in deep crisis and bankruptcy.

The recall of locally assembled Honda Civic 2006 to 2012 model for replacing faulty Takata air bags will cost Honda Cars of Japan which is taking claims from Takata Air Bag. Honda Atlas will not feel the pinch of bearing the cost of replacing air bag which runs into billions of rupees.

It is not clear as to how much the local assembler of Honda cars has completed air bag related replacement work from March till to date. Dealers did not give any clear reply when asked whether the company is installing a different brand of air bags.

Dealers claimed the arrival of vehicle owners is higher than previous campaign. “The company is offering free new installation of two air bags (driver and passenger side inflator).

As per figures of Pakistan Automotive Manufacturers Association (PAMA), the production of Honda Civic from 2005-2006 to 2012-2013 has crossed 50,000 units. Honda Civic 2006-2012 models must have changed hands with multiple owners over the years, but the local dealers said the company is offering the installation of new bags to everybody who own Civic right now.

“We have the list of chassis number of affected vehicles. After tallying it we offer free installation either in just few hours or one day time,” dealers said.

Prior to HACL — Indus Motor Company (IMC) had recalled 9,896 Toyota Corolla vehicles in February 2017 owing to faulty brakes and 2,700 Corolla models in June 2017 after finding that the front mounting bolts of the front seats may be improperly tightened.

Despite these two recall alerts — the sales and revenue figures of Honda Atlas remained brisk so far despite air bag recall, while the call to recall 12,000 vehicles by IMC had also so far not affected the sales.

Now HACL has been struggling to overcome low quality fuel issue and Takata Air bag. The company has advance booking of five months for Honda Civic. The production figures from November onwards will give the exact picture of any negative impact on the company’s financial health over two issues.

Sales revenue of Honda Atlas for the first quarter ended June 30, 2017 almost doubled, to Rs 21,058.1 million against Rs 10,533.3 million in the same period of last year, mainly due to increase in unit sales and better product mix. The company earned profit after tax of Rs 2,086.3 million against Rs 1,050.7mn, up 98pc over first quarter of last year.

Rai Umar Basharat at Top Line Securities said during 2QMY18, Honda Cars reported earning of Rs1.6bn (EPS: Rs 11.3) up 10 per cent YoY (-22 per cent QoQ). In 2QMY18, the company’s net sales grew 48 per cent YoY on account of strong volumetric growth in sales volumes during the period, with Honda City (lower priced car) capturing more of the sales mix. The company sold 2,070 BRV units in outgoing quarter, while total unit sales of 12,604 were up 56 per cent YoY.

Although sales were up 48 per cent, gross profits rose by 9 per cent only as gross margins shrunk 4.3ppts to 11.8 per cent vs. 16.2 per cent last year. Margin decreased due to higher portion of low margin variants (BRV and City). While rising steel prices (CRC prices up 33 per cent during the period) also added to costs.

In 2QMY18, other operating income increased 116 per cent YoY, due to increased costumer advances backed by healthy bookings for the City and BRV, he said.

During 1HMY18, the company reported earnings of Rs3.7 billion (EPS Rs25.9), up 47 per cent YoY. Net sales have grown 69 per cent YoY driven by sales of 23,642 unit up 56 per cent YoY. However margins declined from 16 per cent to 13 per cent due higher costs and higher sales of low margin variants.

In world market, a new report on recalls of potentially deadly Takata air bag inflators shows that automakers have replaced only 43 per cent of the faulty parts even though recalls have been under way for more than 15 years.

The report, issued by an independent monitor who is keeping tabs on the recalls, also shows that auto companies are only about halfway toward a December 31 goal of 100 per cent replacement of older and more dangerous inflators.

The slow completion rate comes even though the National Highway Traffic Safety Administration began coordinating the recalls and phasing them in two years ago. Before that, the automakers were obtaining parts and distributing them on their own. Normally automakers fix 75 percent of vehicles within 18 months after the recall is announced.

The report brought criticism from a U.S. senator in Florida, whose state has seen three deaths caused by the problem and where automakers have fixed 41.7 percent of the 3 million affected inflators.

Takata uses the chemical ammonium nitrate to create a small explosion and fill air bags quickly in a crash. But the chemical can deteriorate when exposed to high humidity and temperatures and burn too fast, blowing apart a metal canister designed to contain the explosion. That can hurl hot shrapnel into unsuspecting drivers and passengers. At least 19 people have been killed worldwide and more than 180 injured.

The problem touched off the largest series of automotive recalls in U.S. history, with 19 car and truck makers having to recall up to 69 million inflators in 42 million vehicles. It also brought a criminal conviction and fine against Takata and forced the Japanese company into bankruptcy protection.

The automakers, he writes, are using different communications methods to reach owners such as door-to-door canvassing. They also are offering mobile repair and trying to use third parties such as independent repair facilities to speed up the process.

As per foreign media reports, Honda is also recalling about 800,000 of its Odyssey minivans in the United States over faulty parts blamed for 46 minor injuries, the company said, just a month after settling a huge lawsuit on other defects.

The recall, which affects the 2011-2017 models sold in the U.S., may later be expanded to include vehicles sold in Canada, Mexico and South Korea. The fault relates to a latch that connects the back seat..

If not properly engaged, the seat may tip forwards during braking, a statement said, adding the firm “has received 46 reports of minor injuries related to this issue.”

The announcement comes after the Japanese group last month reached a $605 million settlement in a lawsuit over defective airbags in millions of cars on American roads.

On low quality petrol issue raised by Honda Atlas – the strict policy of management does not allow any officials to reveal anything to the press. Hardly any print media has seen any interview or reports in which senior executives, owners or any lower rank Honda employees are quoted neither on petrol or other issues.

Honda Atlas informed the Oil and Gas Regulatory Authority (OGRA) in October on the issue of low quality fuel relating to high manganese contents resulting in production halt of Civic Turbo model due to engine knocking problems and damaging of catalyticconverter.

After rocking the entire auto sector and even refinery and retail pumps operators – the officials of Honda Atlas have stopped issuing any further update on the low quality fuel and even the management and senior officials have also been ignoring the media queries over further development on the issue.

On the issue of manganese content in petrol, PAMA informed the regulator that addition of manganese is meant to boost the Research Octane Number (RON) of the fuel in the process of achieving a targeted number. There are hazardous technological and environmental repercussions of the metal content in the fuel if used beyond certain safe limit. From the technical stand point, it would impair engine performance in the long run may choke the catalytic converter thus aggravating pollution level by not blocking/converting the unsafe substances of the exhaust which are hazardous to human health, PAMA said.

In contrast, CEO of Indus Motor Company Ali Asghar Jamali in a print media report had said “we have not received yet any serious complaints with respect to our Toyota vehicles regarding low quality petrol.” So far Pak Suzuki Motor Company Limited has not got any complaint of engine knocking or other sort of issues from the customers on petrol quality issues.

Chairman All Pakistan Motor Dealers Association (APMDA), H.M. Shahzad said used cars of three years old models are being imported from Japan and these vehicles have latest engines which are being used by the leading manufacturers.

“So far no owner of used cars has complained about engine knocking or other problems after using petrol of various oil marketing companies,” he claimed.

Oil Companies Advisory Council (OCAC) claims that the refineries and OMCs are supplying petrol according to the government’s specifications.

OCAC Chairman Aftab Husain said “we have checked and found that there is no abnormality of high manganese content in petrol,” adding that in Pakistan there is no government cap on manganese in petrol.

“If the Euro II petrol is the specification how come EURO IV designed engine will meet the requirement,” he asked.

He said recently the government has improved the specification of petrol and 92 RON has taken over 87 RON. Higher quality petrol (95 and 97 octane petrol) is also available for consumers’ choice.

Honda Atlas has so far not come out with any reply to the threat given by OCAC which strongly urged Honda to withdraw its complaint about the alleged sale of low-quality fuel in the market or face legal action.