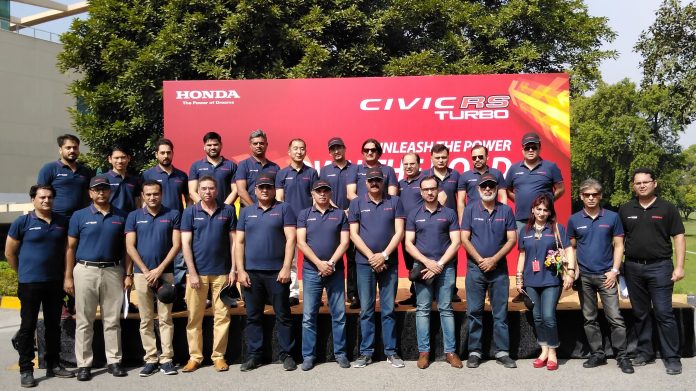 Honda Atlas Cars (Pakistan) Limited (HACPL) organized the Civic RS Turbo 2019 1.5L test drive for leading media officials in the first week of August 2019 in a bid to re-launch the model with much fanfare after suspending its production in 2017 after launching in 2016.
The purpose of this event was to experience the Honda Civic RS Turbo’s comfortable drive and performance of its advance 1.5L VTEC TURBO engine. Media officials drove Civic RS turbo from Lahore to Bhurban stay in Murree and then returned to Lahore via motorway to enjoy exceptional performance.

The 10th generation Civic driving experience was appreciated by everyone.
What excited them most was the RS TURBO engine, which was introduced for the first time in Pakistan. Driving the RS turbo category with new features was also an amazing experience for the participants.

The participants enjoyed the driving and performance of Civic RS Turbo on an unforgettable journey. Automark’s Editor-in-Chief Hanif Memon said he drove Civic model from Lahore to Islamabad and then back to Lahore all the way on motorway to experience the unique performance of the car. He appreciated the introduction of trend setting features of the new civic 2016 model like push start/smart entry, remote engine starter and rear entertainment system. He said that the participants also learned that the car is equipped with Continuously Variable Transmission (CVT), Electric Parking Brake (EPB), Vehicle Stability Assist (VSA) and Hill Start Assist (HSA).

He said that the world’s best seller Honda civic is ruling the automobile industry with the latest model release. For 2016 model, car has got a more stylish cabin with nicer materials. “What we were most excited about was the VTEC turbo grade, introduced for the first time in Pakistan. Driving the 1.5L grade with category leading features was
Honda arranges Civic RS Turbo test drive for media officials also a unique experience for the participants,” he said.

It is to be noted that HACL has unleashed its most anticipated Honda Civic model recently. The new civic model was launched in April-2019, Noriaki Abe, Chief Operating Officer, Regional Operations (Asia & Oceania), Honda Motor Co., Ltd. expressed his views saying that the Pakistan automobile market has tremendous potential to grow. He said that all-new Civic ‘made in Pakistan’ will attract Pakistani customers with its innovative,
elegant design and high performance.

Toichi Ishiyama, President & CEO Honda Atlas Cars (Pakistan) Limited talked about the legacy of Honda and its contribution in the automobile industry. He said that Civic, since its introduction in Pakistan in 1994 had become a household name. It was the outcome of the joint efforts of 1200 dedicated associates working at Honda Atlas Cars (Pakistan) Limited.

HACLP had rolled out Honda Civic Turbo model with Euro IV engine in July 2016 without knowing that addition of higher manganese content in petrol would cast gloom on the future of new sedan.

Within its one year, the company continued to receive complaints from Turbo vehicle buyers relating to engine knocking. As a result, HACL had to suspend production of Turbo Civic model.

According to sources Civic Turbo has been re-launched after undergoing technical modification in its engine and now the car engine is totally compliant with the EURO II petrol in Pakistan. Consumers can drive this vehicle without any hesitation and anxiety.

Coming back to set back to Honda Civic, HACL took up the issue with Oil and Gas Regulatory Authority (OGRA) in November 2017 complaining that fuel suppliers including local units of Shell and Total as well as Pakistan State Oil (PSO) had added manganese in motor gasoline, thus damaging vehicles’ engine.

Manganese was added to fuel to make it appear to be of a higher quality but it can reduce fuel economy and potentially harm public health due to emissions. HACL informed OGRA that oil suppliers had used the additive to elevate the Research Octane Number (RON) used to grade petroleum and lower quality fuel up to the RON 92 grade required by regulatory standards.

The tests showed levels of manganese of up to 53 milligrams per kilogram (mg/kg), while the additive is deemed at a “danger level” at 24 mg/kg, the Honda complaint said.

At that time, head of Oil Companies Advisory Council (OCAC), Ilyas Fazil took the issue in a simple way saying he had not heard of manganese additives being a problem in the industry. He said refineries were producing 90 RON, which is slightly lower than 92…pure 92 RON, that is imported.

Soon after Honda’s complaint to OGRA, other auto assemblers and oil industry executives expressed confusion that petrol carries higher-than-recommended levels of manganese additive, which is damaging its engines.

Indus Motor Company (IMC) at that time said it had received no complaints along these lines as the IMC had four different engine classes that are all Euro II-compliant and none has reported any such issue.

Pak Suzuki Motor Company Limited (PSMCL), having over 50 per cent market share, whose engines are also Euro II-compliant, said it had also received no such complaints.
When other assemblers said that Honda engines are Euro IV and petrol is Euro II, Honda executive disagreed that the engine class was the issue. Honda had been assembling Euro IV engine vehicles for the over one decade and the fuel caused problems not in the engine but in the catalytic converter.

Honda official said the high levels of manganese and sulphur in the fuel
caused the converter to choke. The company had sent turbo engines for testing to Japan, and samples of petrol available in local markets to a lab in Germany, “and that is where the high levels of sulphur and manganese were found.”

OCAC, the body that represents all oil marketing companies and refineries, had issued a short and vaguely worded release in response to the complaint by Honda stating that all fuel being sold in the country is strictly in accordance with the approved specifications issued by the Ministry of Energy, Petroleum Division. Therefore, the question of the sale of poor quality fuel did not arise.

The release made no mention of the specific complaint advanced by Honda that higher-than-recommended quantities of manganese have been found in samples of petrol available in the Pakistani market.

But oil executives bristled at the suggestion that the fuel quality was creating problems in some engines. Manganese was used as an octane-booster all over the world. It was a normal product to find in any vehicular fuel.

Up to 70 per cent of our fuel was imported while the rest was locally produced. Both were mixed with each other in depot storage. In November 2017, OCAC threatened Honda Atlas to withdraw its complaint about the alleged sale of low-quality fuel in the market or face legal action.

But OCAC’s difficulties appeared to have been compounded by question marks raised from within its ranks when one of its key members – Hascol Petroleum – also supported Honda’s allegation of high manganese content in petrol and asked the government to upgrade fuel quality in the market and subject fuels to stringent standard checks.

An OCAC official said Hascol was trying to cash in from badmouthing three largest OMCs for a higher market share even though its entire fuel supplies in the market were of the same origin and quality standards. He said the OCAC would deal with Hascol internally.

Contrary to the impression created by Hascol, OCAC clarified that fuel being sold in the country is strictly in accordance with the approved specifications issued by the Ministry of Energy, Petroleum Division. This is also a fact that “all OMCs, including Hascol, import and buy petroleum products from local refineries in accordance to the official country specifications.

Therefore, petroleum products being sold by all OMCs are on exactly the same
specifications across Pakistan,” it said. The OCAC said the most likely cause of any observed catalyst blocking was a faulty engine management system or high sulphur fuels. Sulphur in fuel is damaging to catalytic convertors; it will poison catalyst surfaces, reducing the efficiency of the catalyst and sulphur compounds (sulphates) can block catalyst substrates.

It said Pakistan was currently at the beginning of its clean fuel journey and sulphur levels remained higher than those required for Euro-IV vehicles, such as Honda Civic 1.5L VTEC Turbo referenced in the complaint. The quality of the fuel in regard to preventing engine knock is measured by the octane value or RON of the fuel.

Based on the specifications of the VTEC turbo vehicle, 91RON fuel is recommended. It means the vehicle is calibrated to operate on 91RON fuel but has the capability of compensating for lower octane fuel. If this vehicle was operated on less than 91 Octane (regardless of the source of the octane improvement) then it might have knocked. This knock will be detected by the knock sensor, and the ignition timing will be delayed to prevent engine damage. If the knock sensor malfunctions, the catalyst plugging may actually be caused by the engine knocking, the OCAC explained.

The OCAC said octane can be improved by a number of means, including the use of high-octane blending components, increased refinery severity, oxygenates, or additives. As long as a fuel meets the required octane quality and the vehicle is properly calibrated for the region, it will not cause engine knock.

It said Methyl cyclopentadienyl Manganese Tricarbonyl (MMT) was surely a manganese-based fuel additive used in the production of unleaded fuel to enhance octane. It was also used in lead replacement as it was the only octane-booster additive, which enables old car engines to run with unleaded fuel. By using MMT, refineries can reduce the use of benzene, aromatics and olefins, hence lowering more internationally recognised harmful-to-health chemicals. Benzene is a known carcinogen.

It said the MMT use in Pakistan was started by refineries over 10 years back after extensive due diligence and ascertaining that both the US Environmental Protection Agency and an independent European Union risk assessment had confirmed that the use of MMT as an octane improver in fuel would not cause adverse effects on human health or the environment. MMT dosage is restricted to the prescribed limits.

The OCAC alleged that Honda Civic 1.5L VTEC Turbo model was currently incompatible with market fuels available in Pakistan because it was a Euro-IV vehicle in a market where sulphur levels were currently unsuitable for this emission standard.

Secondly, the engine management system of this vehicle was improperly calibrated for the Pakistan market and manganese was extremely unlikely to be the cause of failure of this vehicle. In contrast, Euro-II vehicles present in the market also have catalytic convertors and were not reporting such issues. Reports that a Honda “team from Japan was replacing the software used in the 1.5L VTEC strongly suggests that the problem is not fuel-related but because of an incompatible vehicle emission
management system”, it added.

OCAC said there was no limit on manganese content in the government’s standards for petrol. In May 2018, Ministry of Energy (Petroleum Division) had specified various limits of metal contents level (manganese and iron) in the prevalent specifications of 90/92/95/97 RON petrol (imported and locally produced).

On gram per litre content of manganese, Ministry of Energy said this would ensure that testing is performed in accordance with the prescribed method used by SGS, namely ASTM D 3831, whilst keeping it with the precision limits of the said method i.e. 0.25 to 40mg/litre. It is not clear whether the above phasing out of manganese as per the deadline set by Ministry of Energy has been
practically implemented or not.