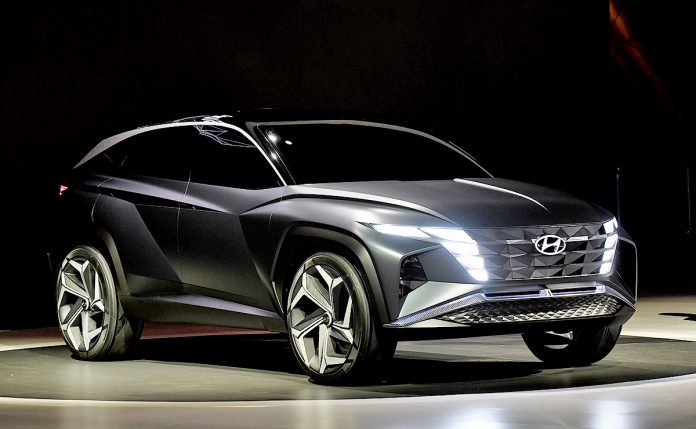 Hyundai’s new concept crossover, the Vision T, is more than just a styling exercise that will influence future vehicles. It’s also very much the design model for the next-generation Tucson coming next year. Hyundai won’t say that in so many words, but the “T” is more than coincidence.

“Without giving it 100 percent away, I think that what you see downstairs is what you’re going to see coming right around the corner,” said Randy Parker, vice president of national sales for Hyundai Motor America. “I happened to be in Korea just a few weeks ago and I saw the same car — let’s call it the almost production version of it — and it was beautiful,” Parker said at the Los Angeles Auto Show. “That concept pretty much looks like the production version.”

Unlike the coming Tucson, the concept is imagined as a plug-in hybrid with a charging port, and the “Sensuous Sportiness” design language will find its way into additional Hyundai vehicles.

“The long hood and level roofline coupled with a long wheelbase and short overhangs reflect a ready-for-anything dynamic character,” the automaker said. “In contrast to prevailing compact-SUV designs, Vision T uses crisp geometric angles and edges to create a striking contrast between a sleek silhouette and masculine wedge lines.”

The Vision T has a length of 181.5 inches, compared with 176.4 for the current Tucson on sale in the U.S., so perhaps the compact crossover is growing for the next generation. Let’s just hope the hidden front headlamps and running lights that fade into the grille when not being used make it from the concept into the production crossover.