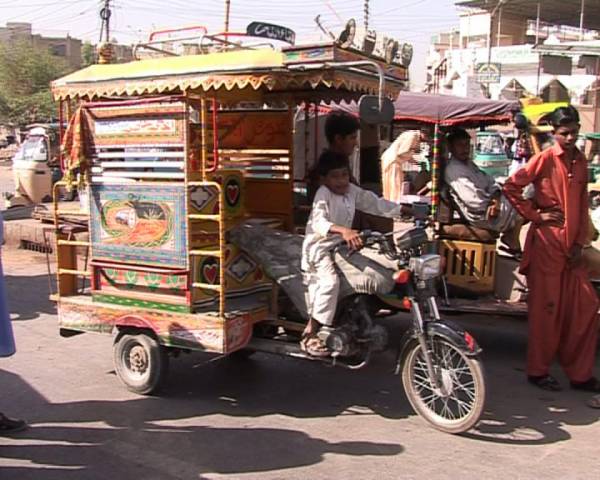 Transport system has to be improved especially for citizens of Karachi

The Sindh High Court has once again banned motorcycle rickshaw in the sindh, the news is not new. Ban on Qingqi/motorcycle rickshaw has been so causal; now the topic seems to be boring.
Motorcycle rickshaws are found in large population in major cities of Pakistan such as Karachi and Lahore. Interesting thing about motorcycle rickshaw is that they are not being registered like other proper public transport vehicles. Being unregistered means that they don’t have any proper records with the government and which also proves that they don’t have laws to stop them.
Travelling in a motorcycle rickshaw is nothing but just being selfish to yourself and the society. Have you ever noticed that these Qingqis create huge amounts of noise and air pollution? We are already deprived of fresh air and then these Qingqis add up to more. The seats you get to sit on are nothing but a source of pain. Not only this I would also add up that there is no safety for the passengers, at least for the ones who are sitting at the back side of it. If a car behind you has fail brakes, you’re nothing but dead.
Any educated individual is not going to have issues with Qingqis. The issue is not with the type of transport but the issue is with the whole transport system. There must be some regulation on them. It’s a norm of our country that we let things get out of control and then start planning and controlling, why not just start controlling from the very beginning.
Transport system has to be improved especially for citizens of Karachi. The transport mafia should be handled and strict actions must be taken against them but unfortunately the government falls ill with a one day transport strike.
SHC must think about the class which travels in these motorcycle rickshaws is, instead of banning them, these Qingqis should get registered as none of them is. Not only this but there should be a limit and a proper stand for Qingqis because currently to be honest they are more than they are actually needed.