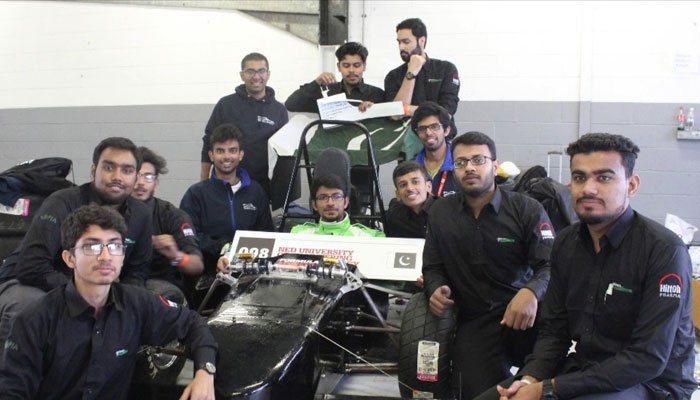 A group of young engineering students from NED University of Engineering and Technology has won “Breakthrough Award” at Formula Student UK’s 30th competition at Silver stone.

Fusion NED, a student racing team representing NED University of Engineering and Technology, consisted of 16 students who paid their own expenses to take part in the competition which was attended by young engineers from 68 countries, run by the Institution of Mechanical Engineers – the world’s largest student motorsport event for student engineers to design, build and race single-seat racing cars.

The team toiled for two years with sleepless nights, dedicating all their time and money and even their earnings for the passionate goal of making a name for Pakistan on the international forum. The team built an outstanding formula student car that competed with 85 leading international engineering universities from 65 countries. The team secured “Breakthrough Award” which has been introduced for the very first time in this mega competition.

The team participated in the coveted event for four days. Despite the hindrances and setbacks, the team persevered even though this was their first entry in the competition. In the end, the team made its mark at the prestigious Silverstone Circuit and received its Award surrounded by the chants of “Pakistan Zindabad”.

Speaking to media, the students said they had no help from anyone but they were determined to make it to the event to show that Pakistanis are innovative and talented and they are making advances in the field of technology. They said that dozens of Formula Student alumni have progressed to Formula 1 and hundreds more are now working at the world’s largest automotive firms. The students added they had to get loans from family members to import parts of the car but thanked Pakistan International Airlines (PIA) for helping to cargo the racing car for free to Britain.

Pakistani team’s car made it to the event after the start of the event because clearance at the taxation department was delayed for two days, but the students were able to demonstrate before the judges and international students how they had assembled and prepared the car in Karachi. The students shared that it was a joy for them to represent Pakistan at the world stage. They appealed to the government of Pakistan to help students who want to make it big at the international stage but lack resources.

Andrew Deakin, Chairman of Formula Student, said in a statement: “It’s brilliant to see so many teams from around the world applying for Formula Student 2017 – it shows that the competition remains one of the most important learning experiences for those aiming to combine their studies with exposure to a real world engineering project. Formula Student is a global competition and we want to continue to encourage brilliant young engineers from across the globe to improve their practical skills and get ready to play their part in the vibrant worldwide engineering community. The innovation demonstrated by these young engineers gets more impressive every time and I’m extremely excited to see what they have in store for us this year.”