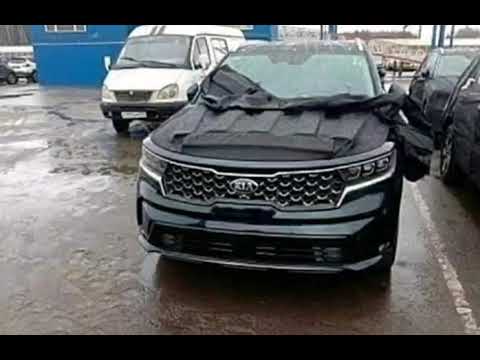 This is the best look yet we have of the redesigned Kia Sorento, thanks to some leaked images circulating on Instagram that expose the mid-size SUV’s front and rear ends and its dashboard. So far, it’s looking good, although we’ll reserve full judgment until we can see more official photos from Kia. The rumor is that the real thing will debut sometime in February in Korea.

Up front, there’s a distinctive grille treatment with a U-shaped pattern and Kia’s signature “Tiger Nose” grille shape that dips down just above the large Kia badge. The blocky headlights have a nice chrome surround. Vertical two-bar taillights make the rear end look interesting enough, and the overall shape and size look relatively similar to the current Sorento, as we saw in earlier spy photos.

The interior design looks like more of a radical departure, as there’s a large touchscreen spouting atop the dash, a digital gauge cluster screen in front of the driver, and aggressively shaped air vents flanking the climate controls. We don’t know if the Sorento will continue to offer three rows of seats or if it will transition to being Kia’s two-row entry now that the larger three-row-only Telluride is in the picture.

Kia has confirmed that there will be a plug-in-hybrid variant of the new Sorento, but we don’t know for sure if that will come to the U.S. market or not. More details should come soon as Kia prepares to debut the new SUV on its own terms, rather than at the speed of social media.