Pakistan Auto Parts Show, the so-called pride and initiative of Pakistan Association of Automotive Parts and Accessories Manufacturers (PAAPAM), has been transforming into a “family gala” rather than showcasing any innovative products. PAPS Auto Show 2018 held at Lahore Expo Centre from March 2 to 4, 2018 was more disappointing than the previous shows.

The show is turning into an event in which old friends belonging to PAAPAM from various cities hug each other after one year and return home saying “I will be back” next year. This is how PAPS has been running under the monopoly of some senior PAAPAM members.

The Association claims to have pulled in thousands of visitors to PAPS but it is not an achievement as shows relating to lawn exhibition, plastic, stationary, cooking, education, etc also draw huge crowd and many companies like textiles also introduce new products.

Like past practice the existing three Japanese car assemblers, who had set up their stalls, had nothing new to offer. Indus Motor Company (IMC) had been taking half body frame of Toyota Corolla to every nook and corner of the country to highlight higher localization achieved by the company. IMC had also taken the same body frame at an auto workshop held at Muzzafarabad Azad Kashmir in the third week of March in which the car had imported tyres.

IMC had never shown any new model or any model change in the PAPS amid reports that Corolla XLI and GLI are reportedly being replaced by Vios by 2019 which the company had been denying so far.

If a big assembler like IMC had been showing old products then what one can expect from Pak Suzuki Motor Company Limited (PSMCL)  however, has been showing brand new heavy bikes which neither can be assembled nor can be imported in bulk for commercial sale.

Honda Atlas Limited and Atlas Honda Limited had also nothing new to offer. All the three existing assemblers had only supported and sponsored the show otherwise their products do not create any extra enthusiasm among the visitors who daily watch them on the roads.

Amid media reports regarding the brown field status given to two old players and five green field investment status awarded to new entrants by the Ministry of Industries for local assembly of cars and LCVs but the PAPS show had only two stalls – one by Regal Automobiles and other was Foreland.

People had definitely missed the stalls of upcoming assemblers of Kia, Hyundai, Datsun and Renault vehicles. If these vehicles had introduced in the PAPS then it would have certainly brought in bigger turnout of visitors.  The makers of Ravi bikes introduced Italian made Vespa in the show which succeeded in drawing attention of buyers.

Many exhibitors had been seen complaining regarding higher amount taken by PAPS organizer in providing space in the show. They were also irked by low presence of media persons as well as mediocre coverage in news channels and print media owing to lack of coordination between press/media and public relation firm. Some exhibitors said the show organizer had taken double rate for providing stalls this year which was unjustified.

Automark magazine had covered the auto show as per its own resources and circulated the news and videos in the social media.

Many seasoned vendors were also absent from the event and even they did not set up any stall. Many Karachi-based as well as Lahore-based vendors also stayed at home.

Surprisingly, Al Haj Faw Motors, who had been one of the regular exhibitors and main sponsors in previous PAPS, backed out from PAPS 2018 due to some very valid reasons.

Lack of enthusiasm by the organizer was much evident as no big shot from the government was invited to inaugurate the event. If big ministers were too busy in various engagements the state ministers should have been approached. Nobody knows why PAAPAM had not invited any ministers or state ministers to the show when PML-N government’s Auto Development Policy (ADB) 2016-2021 had lured $800 million investment in the auto sector for setting up new plants.

PAAPAM had maintained its past tradition of holding the event from Friday to Sunday. The first day was marred by late opening ceremony held on Friday (March 2). Almost half of the day passed in opening ceremony followed by break for Juma prayer. The Saturday and Sunday were completely family days in which people came to enjoy with family and friends.

The B2B meetings were quite slow than previous years. Many visitors with no knowledge about auto industry just came to collect gifts after end of the show. College and universities students also took part and got cash money on winning the competition.

The slogan of the show was “Make in Pakistan” but more than 80 Chinese auto parts makers were present in the show threatening a direct competition to our local vendors. Chinese auto investors had been in forefront in investing in automobile sector of Pakistan.

During three days’ event, many seminars were held with very low attendance of people.

PAPAM should ponder now and force the existing and upcoming assemblers to show their latest brands otherwise they would not be allowed to participate. However, It will be a hard decision for PAAPAM members as they will lose big orders from existing assemblers if they are denied entry in PAPS show.

Imported Chinese auto products are only be allowed in the show in case the exhibitor or investor of the product is interested in setting up an assembly plant in collaboration with local partners. 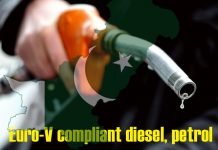