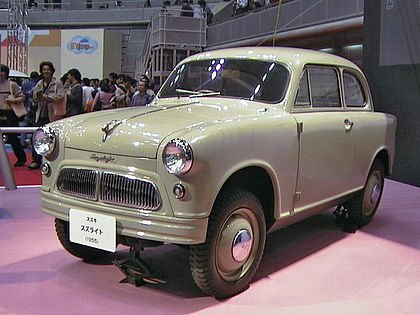 Michio Suzuki founded the Suzuki Loom Works in the small seacoast village of Hamamatsu, Japan in 1909. Business boomed as Suzuki built weaving looms for Japan’s giant silk industry. In 1929. The company’s first 30 years focus was on the development and production of these machines.

Michio Suzuki anticipated lack of a future in looms, he made a decision to start a consumer oriented business. After having considered the company’s technical strengths and the direction of the Japanese economy, he focused on the automobile industry. Michio had a great deal of confidence. “In the near future, it is sure that the era of automobiles will come.”

He started the car project in 1937 and within two years Suzuki had completed several compact prototype cars. These first Suzuki motor vehicles were powered by a then-innovative, liquid-cooled, four-stroke, four-cylinder engine. Unfortunately the world war II was started and production plans for Suzuki’s new vehicles were halted as government declared civilian passenger cars a “non-essential commodity”. After the War,Suzuki went back to producing looms again.But development of car was also restarted, simultaneously at last Suzulight, the first car of Suzuki was introduced in April 1955with a front-engine, rear-wheel-drive. The first Suzuki was closely based on the Lloyd 400.

This was the beginning of a great leap forward. In 2016, Suzuki was the eleventh biggest automaker by production worldwide. Suzuki has over 45,000 employees and has 35 production facilities in 23 countries and 133 distributors in 192 countries. The worldwide sales volume of automobiles is the world’s tenth largest, while domestic sales volume is the third largest in the country.

Suzuki vehicles first appeared in Pakistan market during the mid-70s through CBU imports from Japan.
In 1980 Awami Autos Limited started assembly of Suzuki Pickup and small passenger vans. Pak Suzuki Motor Company Limited,was officially formed in August 1983 as a joint venture between Pakistan Automobile Corporation Limited (PACO, represented by the Government of Pakistan) and Suzuki Motor Corporation (SMC) Japan. The company started commercial production in 1984. Pak Suzuki was the first passenger car manufacturer in the industry when the commercial production started in 1983/84. Suzuki FX was the first vehicle to be produced with an 800cc engine and was priced just around PKR 45,000 for a brand new car. The FX was almost three times cheaper than most vehicles available in the market back then. And even after 30 years of its life in our market, it is surviving strong and holds a decent resale value too. However within three years of introduction price increased up to Rs. 87000/-.

Pak Suzuki was privatized in September 1992 while SMC progressively increased its equity thus acquiring the stake of PACO. The company today is the largest player in the industry with over 50% market-share and a virtual monopoly in the ever growing small car market.

Now Suzuki vehicles enjoyed good sales due to a good reputation, low maintenance cost, and no competition since imports were halted in favor of local production already. For up to 6 years, locally produced Suzuki vehicles were not available in metallic colors; paint quality was below par, optional trims were not available for most models but still the cheaper yet easy to maintain Suzuki vehicles sold quite well.In 2001, Suzuki started to roll out factory fitted CNG vehicles and in the same year, SMC increased its equity to 73% in Pak Suzuki. In 2002, Suzuki launched a facelift for Alto hatchback.

After the new auto policy 2016-21 was announced, Pak Suzuki expressed its concerns over the policy and termed it ‘devastating.’ They also indicated to shelve their investment plans in Pakistan and further demanded that the government should revisit the auto policy. What Pak Suzuki needs to understand is that they cannot sell the 30-year-old obsolete cars till eternity. But it remains the fact that these obsolete cars make up nearly 85% of Suzuki’s sales in Pakistan. Up till now Pak Suzuki has sold over two million units in Pakistan.

by Anwar Iqbal, this exclusive article has been published in Automark Magazine’s April-2019 printed edition.