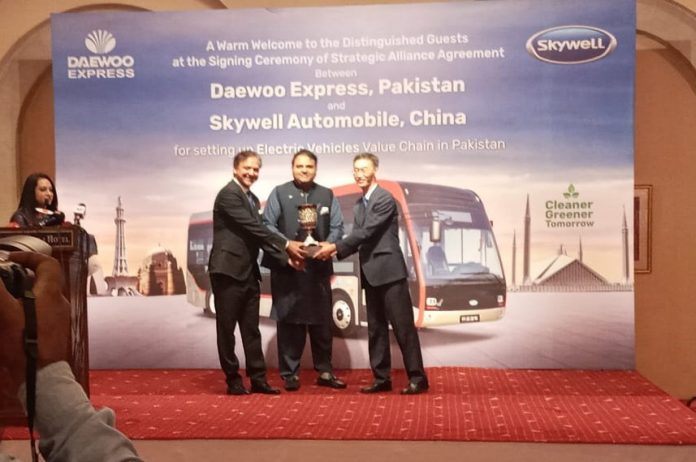 Minister for Science and Technology Fawad Chaudhry has announced that electric buses will start plying in the country this year.

He was speaking at an MoU signing ceremony signed between a private transport company of Pakistan and a Chinese company, in Islamabad at local hotel on August 26, 2020.

The MoU will lead to introduce an electrical vehicles chain in Pakistan which, will help reduce air pollution as well. In the first phase, 50 million dollars will be invested in building infrastructure; while in the second phase, manufacturing of electric buses will start in Pakistan within next three years.

The Minister termed it a breakthrough in fulfilling another promise by the PTI government to take the country to progress. He said that Pakistan would be first country in Asia that will have electric vehicles.

He said in next three years, these electric buses will be completely manufactured in Pakistan. He said the PTI government is working to promote Pakistan’s new energy vehicles policy.

Speaking on the occasion, Chinese Ambassador Yao Jing said the governments and peoples of the two countries are working together for development and strengthening of bilateral ties.

He appreciated role of Pakistan in providing facilities to the private sector for strengthening business to business relationship between the two countries. He said several power plants are also being set up under China-Pakistan Economic Corridor to overcome power shortage.