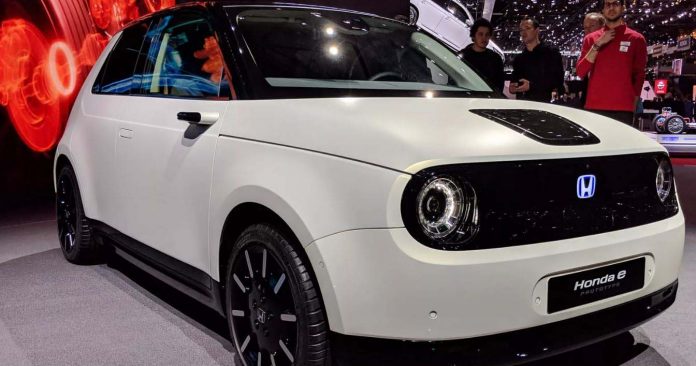 On sale by the end of the year, priced in the vicinity of Tesla’s Model 3

It’s the nature of the Geneva Motor Show that to get to the fun new EV designs, you have to walk past an exhibition of ridiculous vehicular opulence, but nothing was going to slow me down en route to seeing the Honda e Prototype, the evolution of the most appealing electric vehicle concept I’ve yet seen. 2017’s Honda Urban EV Concept charmed me at last year’s Geneva exhibition, showing off a retro three-door design with a bench front seat, a car-spanning ultra-widescreen display on the interior, and huge suicide doors. Its old school minimalism and new school electric powertrain were an irresistible combination for hipsters like me.

The new e Prototype carries over much of the original’s appeal, though loses a few of the edgiest features in the name of practicality. The front seats are now conventional, the enormous single display has been segmented into two touchscreens in the middle and a pair of rear-view monitors on the sides, and the doors have increased in number to five while their opening is now hinged at the front rather than the rear.

With a rounded-off front and a more familiar body shape, the e Prototype looks a lot less alien than the concept that spawned it, though it’s also a lot closer to mass production.