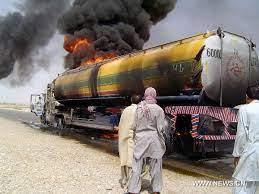 People burnt to death and 6 people got critically injured on the predawn of 17th August 2022. The crash occurred when a Daewoo passenger bus rear ended a tanker carrying ethanol and caught fire on the Multan-Sukkur Motorway (M-5).

The mega crash bears an uncanny similarity to an incident back in 2015 when a passenger bus rear ended an oil tanker near Shikarpur, ending 62 lives.

In 2011 again, a bus slammed into an oil tanker in Jamshoro, Sindh, setting off a blazing inferno that gutted both vehicles which killed 32 people and critically injured nine.

Driver fatigue is a common denominator, even reputed companies like Daewoo have little regard of local laws such as ‘Road Transport Worker’s Safety Ordinance 1961’ which allow a maximum 8 hours driving per day, 48 per week, and a mandatory rest period every 4 hours. The violation has never been checked or enforced. Companies dealing with hazardous material like Shell, Total and Mol Pakistanprohibit all logistics movement at night but hazardous chemicals are being transported at night by the unregulated industry and even some industry giants.

Tanker design is another factor. Pakistan OGRA standards require a min 4mm shell thickness and the bumper to be extended at least 15cm beyond the tank to minimize the chances of tank leakage in case of rear end collisions.

According to M. Asfandyar, crash safety research engineer in ADCR, the only crashworthiness research company in Pakistan “Vehicle crashworthiness standards in Pakistan are old and fragmented, companies often fail to see the long-term picture when it comes to investing in safety and bid for short term profits –the government sleeps too. For example, there is no law in the archaic Pakistan motor vehicle rules of 1969 mandating and emergency escape door in busses. It’s not rocket science, nor does it cost much. Ironically, transport companies do not demand it from the manufacturers either. The tragic results are evitable! We shall see a change only when companies realize the cost benefits of safe operations”

Breaking the chain is not a one dimensional, it would require an effort from all sides. The government needs to wake up and realize how outdated its laws are. The transportation industry also needs to realize that such tragedies are preventable and save huge reputational and monetary losses. Effective driver management and safer vehicles is doable and profitable. Until then – history will continue to repeat itself.