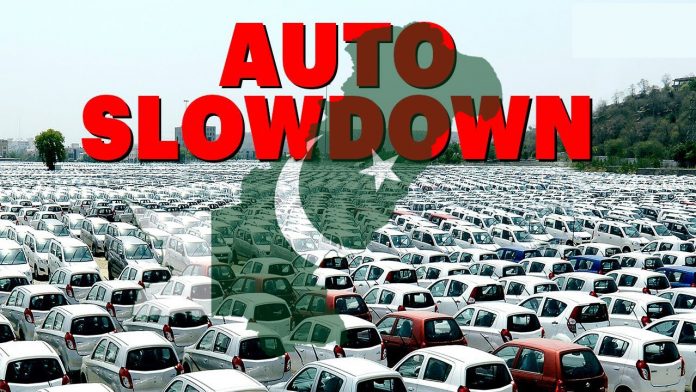 With already struggling under high food inflation, utility bills and fuel prices – the suffering of the people further has intensified with a new wave of
joblessness in the auto sector.

Vehicle assemblers for the last few months have been passing through a turbulent phase due to tumbling sales, bringing thousands of people jobless at the assembling and vending units on which the government looks least concerned.

The Budgetary measures 2019-2020 like additional customs duty, federal excise duty of 2.5-7.5 per cent on different engine power and additional sales tax have played caused sleepless nights for the industry operators while the rest of the damage was done by massive over 30 per cent rupee devaluation against the dollar in FY19. Hike in interest rates to 13.5 per cent by the State Bank of Pakistan (SBP) brought more despair than the relief for already ailing sales. As a result of negative exchange rate and new taxes and duties, car prices, amid claim of achieving higher localization, have gone beyond the reach of many people.

Indus Motor Company (IMC), which observed eight and 10-11 non production days (NPD) during July and August, had further extended NPDs by 15 days in September thus bringing down production capacity by less than 50 per cent.

Honda Atlas Cars Limited (HACL) was the first to start 10 NPDs in July and further maintained NPDs in August and September with reports that the company had been rolling out vehicles for only two days of a week in view of falling demand.

By the time of filing this report, IMC and HACL had over 3,000 unsold stocks each of Toyota and Honda vehicles with reports of firing over 1,000 daily wagers and contractual workers each. The second shift at these two Japanese assembling units has been shut down. The second shift in Pak Suzuki Motor Company Limited (PSMCL) has also been closed down which means at least 1,000 daily workers and contractual workers had suffered their job.

Authorized dealers of these local assemblers say that they had not seen such a worst time in their life as only one car goes out of the showroom and sometimes we keep sitting idle the whole day.

Under a serious auto sales crisis, fear among people working in authorized showrooms is also growing of being fired while similar situation also exists in banks dealing with car financing. Reports are swirling in the market that some banks have closed the desk of auto financing besides removing the staff in view of no orders.

However, Pak Suzuki Motor Company Limited (PSMCL) has so far not tasted a bitter period like HACL and IMC despite massive sales fall in most popular Suzuki WagonR. So far
the company has not observed any NPDs.

“Alto 660cc has taken over the market share of WagonR,” market people said adding “under the current auto crisis, brisk Alto sales has literally saved PSMCL.”
However, sales of Alto model declined to 3,435 units in August from 4,585 units in July.
Overall car sales during July and August nosedived by massive 41.3 per cent to 20,094 units compared to 34,264 during the corresponding months last year.

In August, total car sales lowered to 9,126 units versus 15,389 in the same month last year. Moreover, car sales during August remained subdued because of Eidul Azha holidays, whereas discontinuation of the Suzuki Mehran model also took its toll on the overall auto sales.

As per figures of Pakistan Automotive Manufacturers Association (PAMA), Honda Civic/City sales saw the largest plunge to 2,558 units in July and August, from 8,078 units last year followed by Suzuki Swift sales, which dropped to 338 units from 839.

Suzuki Cultus and WagonR also suffered major setback with sales of 2,497 and 1,488 units versus 3,041 and 5,222 units in 2MFY18 respectively. PAMA figures showed that the last two months also saw steep fall in sales of Suzuki Bolan to 703 units from 2,559 units.

The government needs to rescue the auto sector who plays an important role in providing jobs to the fresh graduates. Perhaps the government has not realized that declining sales will bring down sales tax and duty collection. Economic slowdown coupled with low large scale manufacturing and falling imports had caused decline in Hinopak, Master and Isuzu truck sales 235, 91 and320 units in 2MFY20 as compared to 473, 210 and 516 units in same period last fiscal.

Hino, Master and Isuzu bus sales came down to 63, 34 and 63 from 78, 54 and 85 units in 2MFY19. Assemblers of these vehicles have slowed down their production due to subdued demand as some of them have shelved their future investment plan like Hino’s of Rs 300 million last year to boost production capacity. During first quarter of FY19, introduction of filer and non filer restriction for buying vehicles had affected heavy vehicle sales.

In trucks, work at certain government projects had halted, so are the supplies of trucks and the respective payments, resulting disruption of the chain of events at the trucking industry. Market is abuzz with reports that heavy vehicle assemblers have taken forced resignation from the employees to lessen the financial loss.

Auto sector people said that below 800cc vehicle is sailing smoothly in difficult time as fear looms among people of being grilled by Federal Board of Revenue (FBR) to provide source of income in buying 1,000cc and above engine power vehicles. There are also reports that authorized dealers, as per directive of Federal Board of Revenue (FBR) demand CNIC copy of people whose service, tuning and repair bill exceeds Rs 10,000 saying that in sharp contrast, Indian car industry is also undergoing same sales debacle. But the reason of depressed sales in India is different from Pakistan.

In India, Euro6 vehicles would be introduced next year, making people reluctant to make fresh purchase. Besides, government collects 28 per cent general sales tax (GST) as well as different slab of cess depending on engine power.

In Pakistan, consumers are plying Euro2 vehicles due to Euro2 fuel availability in the country. India is far ahead in achieving fuel and vehicle standards than Pakistan.
Another reason of low sales in India is rising trend of using on line cab service like Uber among people, who believe that using these services is better than buying a new vehicle at a time when parking problem is the biggest challenge in mega cities of India.

In Pakistan, people went wild to lift new locally assembled cars for plying in Uber and Careem but it has lost charm for many new investors due to rising fares by these two cab schemes. Now old cars with air condition and rickshaws are doing pretty well business than higher engine cars due to their lesser fares than big cars.

However, bike sale in India is also going down which is surprising keeping low
prices as compared to Pakistan. Here in Pakistan, bike sales are also not satisfactory due to multiple price shocks by the manufactures amid claim of achieving over 94 per cent localization in two wheelers.

One can blame the previous and current governments for giving a free hand to the auto sector to keep jacking up prices on the rupee-dollar parity despite achieving higher localization. The governments had never checked whether the industry has really localized the bike and car segment as per targets set by the governments.

So a double edge sword exists here as both manufactures rely on imported hi tech parts followed by vendors on imported raw material. Besides, the vehicles launched by some existing assemblers and new entrants also have low localized parts, which mean that prices will remain under pressure in future.

According to Economic Survey FY19, bikes cater to lower income group and are extremely price sensitive. Still, this sector offers most preferred and economical means of transport and best alternative in the absence of public transport in the cities and thus holds a dependable and continued potential for growth in the coming years.

Bike sales showed contrasting trend as some assemblers, after enjoying a good FY19, faced precarious sales during July-August 2019 while for many manufacturers, the start of new fiscal FY20 year is almost as volatile as FY19.

Amid 94 per cent claim of achieving localization in 70cc segment, the assemblers had given multiple price shocks to the consumers in the last one and half years, blaming high cost of imported parts and raw material prices triggered by losing rupee value against the dollar to Rs 158 from Rs 123 in August 2018 and Rs 110 in January 2018.

PAMA figures also reveal sales recovery by some assemblers in August 2019 from July 2019 but the volumes July and August 2018 were far healthier than the same months of this year. A number of buyers lift bikes on monthly installment whose share comes to 60 per cent of total sales. As per market reports, these types of bike buyers have also become hesitant as monthly installment also goes up due to high price bike prices coupled with
falling affordability issue of maintaining monthly installment regularly, he said.

Persistent increase in bike prices had also taken away buyers from the markets as the impact of rupee depreciation against the dollar had still not been fully passed by the assemblers to the end users. Some assemblers have passed on 15-20 per cent while others by 12-15 per cent, he claimed.

The issue of sales tax registration of dealers under third schedule effective from July 1, 2019 also haunted Chinese bike dealers mainly thus causing major setback in sales as dealers stopped lifting bikes from the assemblers. However, it is good to see some dealers registering in sales tax.

On recovery in sales of Road Prince bike in August to 11,235 units from 4,827 units, he said “our last year average sales were 16,000 units per month but we lost sales by 30pc. How can we re-employ people if our sales sleep on these numbers,” he added.
“Bike sales in future will depend on various crops and their prices but consumers’ cost of living may remain under pressure owing to continuous increase in food prices,” he added.

With some dealers started registering in sales tax, reports are swirling that FBR team would start arriving from next month in the markets and it would issue notices to both assemblers and dealers after finding non registration of dealers in sales tax net, he said. He said installment business has also affected by at least 40-50 per cent during the last six months as many buyers feel difficulty in paying monthly installment of Rs 3,000-5,000 per month on 70-125cc bikes out of their monthly salary of Rs 25,000-35,000 per month. As a result, they sell their bikes back to the dealers.

On unemployment, he said daily wagers suffer the most at the factories and vending units instead of permanent and contractual workers. Attributing depressed two wheeler sales to country’s overall economic slowdown, Sabir expects sales revival depending on cotton and other crops in coming months. He said sales tax registration issue of dealers had not hit Japanese bike assemblers as majority of their dealers are registered in sales tax.