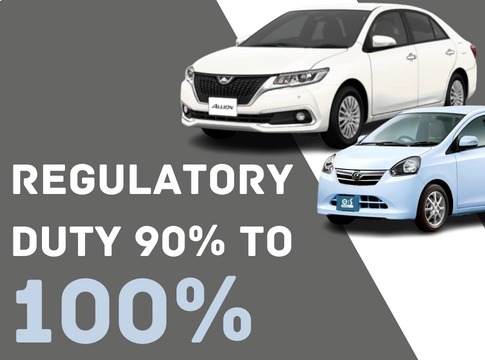 Pakistan increases the regulatory duty on imported vehicles by 100%

Instead of a complete import ban, the Government of Pakistanhas increased regulatory and additional custom duties earlier this week on a variety of imported vehicles.
The Federal Board of Revenue (FBR) issued SRO 1571(I)/2022, through which it would raise the regulatory tariff rate on imported motor vehicles from 90% to 100%.
Regulatory duties on imported vehicles are applied at a rate of 100% which included the following:

For vehicles in 1000cc to 1300cc category, customers will experience the high estrise in regulatory obligations. Since this is typically a highly price-sensitive sector, the fourfold increase in regulatory duties for the 1000cc to 1300cc category is anticipated to affect overall car imports. In this area, customers search for the greatest offers as an alternative to locally produced goods.

In Pakistan, sales of minivans are rather low, but ATV and SUV buyers are already accustomed to paying more.
To sustain the balance of payments and stop rupee value losses, the government previously banned the import of CBU(Completely Built-Up Vehicles) motor vehicles on May 19, 2022.

However, on August 20, 2022, the government agreed to lift the prohibition due to pressure from the IMF (International Monetary Fund).
The hike in duties may provide local vehicle producers a break as a knock-on effect. The State Bank of Pakistan (SBP) is more likely to abandon its expanded administrative monitoring of completely knocked-down (CKD) kits if Foreign exchange outflows are restricted.

People buy used imported cars as per required with their families. At the same time, used vehicle costs are relatively high, making it quite challenging for customers to afford them during the present economic downturn.

The government’s recently introduced Roshan Digital Apni Car Scheme is exactly what is taking place. According to the program, Non-resident Pakistani can finance a car digitally from anywhere in the world, more easily and at lower rates than Pakistanis who are residents of Pakistan.

The intention is for Pakistanis who are not citizens to purchase more vehicles at home and send more earnings to do so.
If cars are imported from overseas Pakistani people, they pay with foreign exchange, the currency of Pakistan is not going out so why is their high rate of duties on used cars?

The government should consider this matter, and put high rates of duties on the cars which affect Pakistani currency.