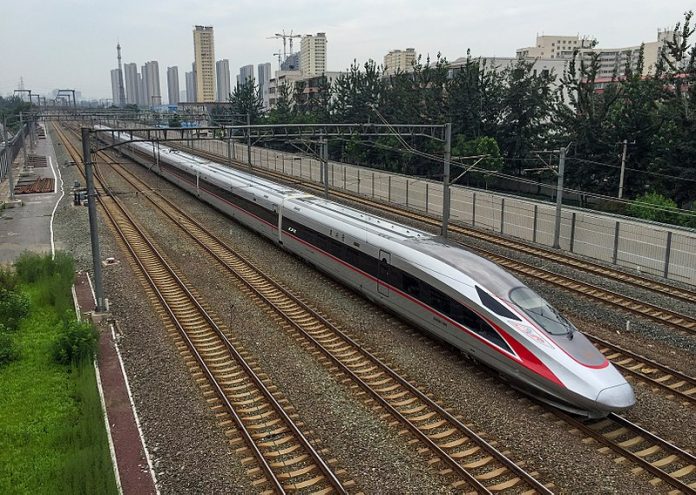 China has just hurtled past another milestone in its vast high-speed railway expansion plans.As the countdown to the 2022 Beijing Winter Olympics continues, the new 108-mile high-speed railway line connecting the capital with Olympic host city Zhangjiakou has just entered service, cutting the travel time between the two from three hours to 47 minutes. But this isn’t just another bullet train.This beauty, part of China’s Fuxing series, can run up to 350 kilometers per hour (217 mph) without a driver — said to be a world first.

It’s also been dubbed the world’s first smart high-speed railway.Taking about four years to build, the line, also referred to as the Jing-Zhang high-speed railway, connects Beijing, Yanqing and Zhangjiakou, all three of which will host events during the upcoming Winter Olympics.The route will stop at 10 stations, including Badaling Chang Cheng, the most popular section of China’s Great Wall. Chongli railway, a branch line from the Jing-Zhang railway, is also open and will ferry passengers from the capital city to Taizicheng Station — a stone’s throw away from several skiing competition venues and the Olympic Village.

Just how smart is this new train?

The new rail line began operations on December 30, with the first train running from Beijing North Railway Station to Taizicheng Railway Station.A quick search on the official high-speed railway website 12306 China Railway shows there are currently about 30 bullet trains running between Beijing and Zhangjiakou daily but only six of them are serviced by the new “smart train”.Tickets range from RMB77 ($11) to RMB231($33) for a normal high-speed train and RMB90 ($12) to RMB270 ($38) if you’re traveling on a smart train.At the time of writing, tickets for the smart trains need to be booked two days in advance.

So what makes them “smart?” Well, the carriages are equipped with 5G signals, intelligent lighting and 2,718 sensors to collect real-time data and detect any operational abnormalities.Meanwhile, each individual seat has its own touch-screen control panel and wireless charging docks. Though the high-speed trains on the route are autonomous, a monitoring driver will be on board at all times. The trains can automatically start, stop and adjust to the different speed limits between stations.Back at the station, robots and facial recognition technologies have been deployed to help passengers with directions, luggage and paperless check-ins.

Getting ready for the 2020 Winter Olympics

The trains’ interiors have been designed with the needs of athletes and journalists in mind, too.Some cabins feature larger storage areas for winter sports equipment, which can be accessed by QR code. Special storage spaces have also been created to house athletes’ stimulant test samples.The dining car can reportedly be converted into a media center during the Olympics, with adjustable seats and tables making it easier on journalists traveling with lots of equipment.

The car will also offer a live-broadcast service and charging outlets underneath each table. Car Four features removable seats, which will make it easier for passengers traveling with wheelchairs during the 2022 Winter Paralympics.”[The trains] can improve the efficiency of our work, promote China’s winter sports, and boost the ice and snow economy,” Yang Yang, a Winter Olympics speed skating gold medalist and one of the first passengers to ride the new line, tells state-run media Xinhua.

Chinese railway enthusiasts are excited about the new route for another historical reason.Jing-Zhang Railway was originally the name of a now-defunct line. First opened in 1909, it was the first railway designed and built independently by Chinese, linking Beijing and Zhangjiakou. Traveling along the entire route back then took eight hours.

The line’s few remaining original stations closed in 2016 to make way for the construction of the new high-speed railway.Today, China is home to the world’s largest high-speed rail network, which stretches about 35,000 kilometers, and the fastest commercially operating train — the Shanghai maglev.Running at the top speed of 431 kph, the train links Shanghai Pudong Airport and Longyang Road in the eastern side of Shanghai.