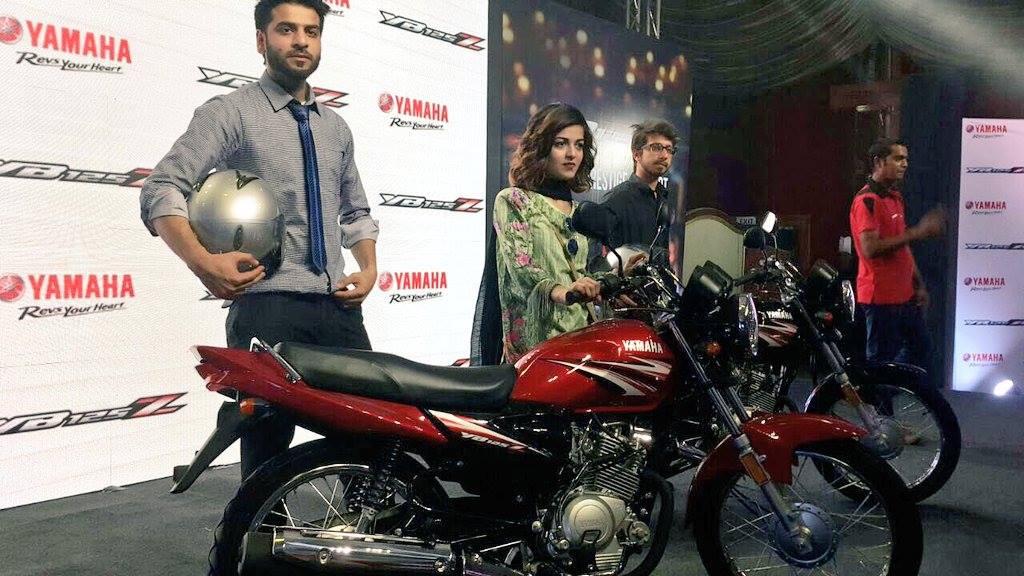 Yamaha has come Pakistan to test itself for second time. But there is a major difference in both situations. In first case Dawood group and Yamaha were jointly manufacturing and marketing the Yamaha motorcycles. But second chance is a better option for Yamaha. Yamaha Pakistan is single entity and has full control of steering of the car. Moreover, it has been also heard that the Government of Pakistan has supported Yamaha Pakistan well for their re-entry to Pakistan.

Now while I am writing this article, decent time has been gone, since the launch of Yamaha Bikes in Pakistan. So, let’s discuss whatsapp there.

Yamaha YBR-125’s one on one competitor is Honda CG-125. Now, do you think that this competition was won by YBR? Taking views of users, CG-125 can’t be compared with YBR-125 due to its pick-up, sound, easy handling (due to size), price, resale, spare parts & service availability. Above all, the huge network all over Pakistan. After all this, let me share a simple & short story. Many riders went to YBR as it was dashing bike in looks and was a good change in the market. Above all, it was Yamaha Brand name. Ultimately, this movement of riders resulted in betterment in sales graph.

One more factor which played important role is that as it was new thing, so no one had experience of riding YBR, so all of them assumed that it will be a better option in all respects.

Then we noticed the upward graph of accessories sellers. Do you know why? The users of YBR were feeling the lack of something that was an important part of their riding life i.e., the thrilling sound of Honda CG-125. Though they did changes to YBR bikes in order to fill their thirst but the bike, even with many additions was unable to meet the target. So, we witnessed many used Yamaha YBRs on sale at local markets and also online. This is one important reason that Atlas Honda has seen very good sales of heir CG-125 model in recent times.

YBR is believed to be a sporty design street bike in Pakistan but they did not offer a real sporty fuel tank cap. Whereas 2008-12 model Piaggio Storm has offered this in Pakistan.

Famous 150cc bike of Japanese brand is between PKR.135000 to PKR.140000. This bike is liked because of its biggest Pakistani made engine, giant looks, comfortable ride and brand name. This is GS-150 from Suzuki. A very famous and favorite bike that has turned into a cult, a 125cc bike of a Japanese brand is between PKR 105000 to PKR 110000. This very famous machine is known for its acceleration (aka Pick-Up), DurDur sound, easy handling, good resale, 3S country wide facility and brand name. This is CG-125 from Honda. Honda CG-125 has highest sales in its category, so we can say that it is justifying the price well. Moreover, once a bike has crossed One Lack mark, it must have guts to justify this Price Tag.

Did Yamaha Pakistan brought new techniques of business in Pakistan?

Can 70cc/100cc class thinking handle such products? Sometimes, the teams who have been working in a specific environment and with a specific style cannot change themselves easily. As per our information, the Yamaha Pakistan team has many members that have worked for Dawood Yamaha. As they have been managing Yamaha Royale 100cc for many years and then DYL 70cc bikes for quite some time, so it might be difficult for them to adjust themselves as per requirements of an international model(s).

What do you want? Conversation between Mr. CG, Mr. GS and Mr. YBR:

Mr. YBR: Hello all, thanks for welcome

Mr. CG: What is your price Tag?

Mr. CG: I am just wondering about you. What do you want? If you don’t know me well, then I must tell you that I am top selling Brand of Pakistan in 125cc category, infact I challenge Mr. GS(which is 150cc) too and feel proud because in most of times I am the winner. I am best in Power To Weight Ratio, my parts are available all over Pakistan at reasonable rates, mechanics play with me, riders enjoy with me. Though I am small in size but easy to handle, rider can do many stunts using a CG-125.

Mr. GS: I must tell you Mr. YBR, I am biggest bike of Pakistan with biggest engine, comfortable seat and suspension and I am here since 2006. Please tell us why are you here and what do you want?

Mr. YBR: Dear both let me be very clear. Actually I am here to compete with Mr. CG as both of us are from same category i.e., 125cc. I can say I want to defeat Mr. CG.

I am beautiful, I am good looking, I am hot, I have alloy rims, disc brake, fuel gauge, and gear indicator. And I know both of you lack these facilities. Yamaha Pakistan team might have thought that these qualities would be enough to justify my price. Yamaha Pakistan team might have in mind that today, the customer wants these things, you know show-off.

Mr. GS: Oh really, I didn’t know that. I will talk to Pak Suzuki Team about all this. Bye guys.

Mr. CG: Considering everything you have, considering all models your company will bring against me alone, I want to make one thing clear that I am not a bike today, I have become a cult. You might feel good for the time being with the help of your brothers (YBR-G 125 & YB125Z) but ultimately I will rule. If you want to defeat me, you will have to capture the mind & heart of Pakistani customer who loves my sound and enjoys the Pick-Up I offer. I am not a bike only, I am a culture today.

Technically speaking, Yamaha can offer economical pricing options? Yes because of few things, I believe. Those few items that are common in their three models. Copying views of riders from different cities, I would share that the Engine, Chassis, Rear Cowling, Meter, etc are common in three models (YBR, YBR-G, YB125Z). Fuel tank, seat, handle grips etc are common in YBR and YBR-G. So, economies of scale philosophy should help Yamaha to offer better prices. This will really help Yamaha.

Now, considering all what has happened so far, has Yamaha learnt any lesson? It must be visible in their new project of YB125Z.

Let me quote a simple example of Mr. [email protected] A boy Mr. [email protected] was impressed by Yamaha YBR-125 because of it’s stylish designing, so purchased the YBR after selling his CG-125. As the bike was new, he completed Running Period carefully. But, his feelings were pushing him for something. So, he changed the silencer with one that could give more sound. Later, when running period was complete, he started riding his bike faster. At that particular time, he was able to use the YBR at higher speed. But soon he realized that after buying a bike of around PKR.1,30,000 and then spending PKR.15,000 to PKR.20,000 on it, his thirst of riding a powerful two wheeler is still there. He tried his best to compromise but he could not, so he went out to the market and sold his YBR-125. And yes, he had to face bigger loss than he faced in case of CG-125. Mr. [email protected] sold a bike (CG-125) of around PKR.1,00,000 plus and invested around PKR.1,50,000 (or little less) for a new bike (YBR-125), but his thirst was filled by his first choice(CG-125).

Mr. [email protected] not be attracted by the features YBR has. Moreover, he spend PKR.50,000 more on YBR-125 to satisfy his heart but could not.

Has Yamaha Pakistan Team learnt something from past? Are the sales figures of Honda CG-125 coming down and YBR-125 going up? Do try to find out.

When a bike with alloy rims, disc brake, sporty style, Yamaha brand name could not find success against CG-125 (Honda), then has someone tried to find the main cause (of problem faced)? I being a rider and considering views of riders from all over Pakistan must share that there are few issues that need to be reconsidered. I know that it will be difficult to make changes for enhanced and faster acceleration but price can be an option to discuss for better results. I think Yamaha Pakistan Team can take YBR-125 as case study for expecting better results from YB125Z.